View the comic strip for Peanuts by cartoonist Charles Schulz created October 02, 1950 available on GoComics.comAuthor: Charles Schulz. History 1940s. Peanuts had its origin in Li'l Folks, a weekly panel comic that appeared in Schulz's hometown paper, the St. Paul Pioneer Press, from 1947 to 1950.He first used the name Charlie Brown for a character there, although he applied the name in four gags to three different boys and one buried in the sand. The series also had a dog that looked much like the early 1950s version of Snoopy.Author(s): Charles M. Schulz. 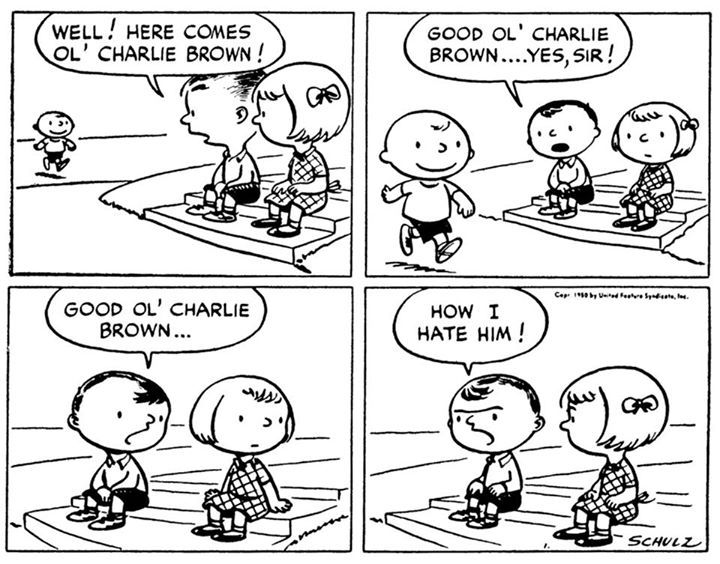 Charles Schulz debuted his first-ever Peanuts comic strip on October 2nd, 1950, in nine newspapers around America. 65 years and nearly 18,000 strips later, the simple wisdom of Charlie Brown, Lucy Author: Reader's Digest Editors. October 2, 1950 (The first ever Peanuts comic strip, Shermy, Patty and Charlie Brown appear. This strip is adapted in Happiness Is a Warm Blanket, Charlie Brown) October 3, 1950 (Patty is reciting the traditional nursery rhyme "What Are Little Boys Made Of?" Schulz had previously referenced the.

Oct 01, 2013 · The world was introduced to Charlie Brown and the Peanuts gang on Oct. 2, 1950, when the first comic strip debuted in nine newspapers around the U.S. Peanuts quickly became one of the most popular comic strips of all time and influenced movie, television, book and theater spin-offs.Author: Elisa Marks. First appearance: September 2nd, 1978 Sally sits in a bean bag. Charlie Brown walks by. Sally asks, "Where are you going, big brother?" Charlie Brown replies, "Well, I finally got up nerve to call that little red-haired girl, but I dialed Marcie by mistake, and got a date with Peppermint Patty...".

"I wanted a strip with dignity and significance. Peanuts made it sound too insignificant." (See the top 10 children's books of 2009.) The first strip was printed on Oct. 2, 1950, and appeared in seven newspapers. In the strip, Charlie Brown walks by two friends, one of whom remarks, "Well! Here comes 'ol Charlie Brown! Good 'ol Charlie Brown. "A Charlie Brown Christmas" was the first animated T.V. special based on the "Peanuts" comic strip. It debuted on CBS in 1965 and was shown on that station every year until 2000. It has been shown.